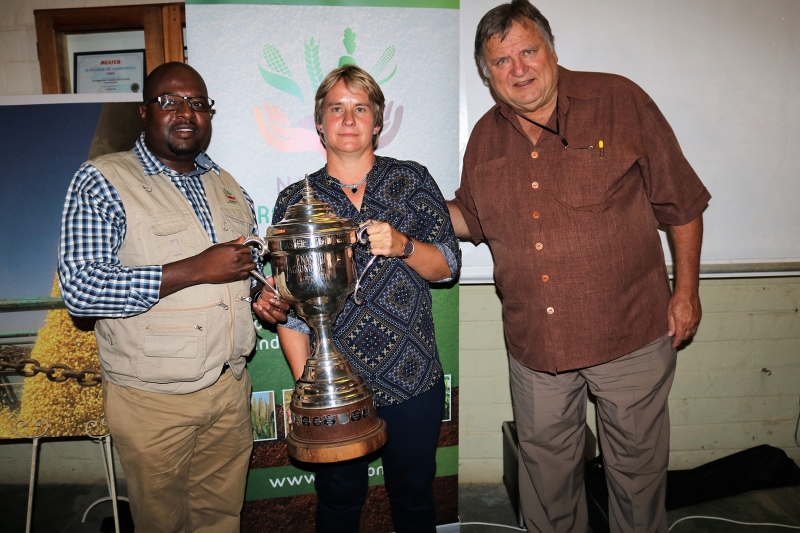 Elize van Niekerk of Farm Springvale in the Summerdown area, was crowned 2018 Master Agronomist at the award ceremony and information day held on Thursday, 19 April 2018.

Since 1995, the Namibian Agronomic Board (NAB) has annually awarded this prestigious award to an exceptional maize farmer. The event was hosted in collaboration with Namibia Agriculture Union (NAU) under the theme “There Is Hope”.

The award is presented to a farmer who is not necessarily evaluated on the size of his/her harvest, but rather on practising an exceptional innovative scientific approach, good risk diversification, good labour relations and community involvement. For the first time ever since the inception of this award, a woman has been crowned as the Master Agronomist winner.

Elize van Niekerk, started farming four years ago after her husband passed on. She produces under both dry-land and irrigation conditions and practices crop rotation. With 20 hectares of irrigated maize at an average of 14 tons/ha and 80 hectares of dryland maize at an average of 7 ton/ha. Speaking at the event Van Niekerk said the motto that led her to her success is “do what you can with what you have & where you are”. She encouraged other Namibian farmers around the country to put in extra efforts in managing their farms. “With the same amount of inputs, every farmer can double their production, hence the theme, there is hope”, she said.

Antoinette Venter, NAB’s Manager: White Maize and Wheat said Van Niekerk’s dedication, courage and smart management of her resources is indeed commendable and is an inspiration to many. “The passion and drive Van Niekerk has for agronomy and the implementation of smart farming practices is also clearly demonstrated through neat infrastructure on the farm’’, she concluded.