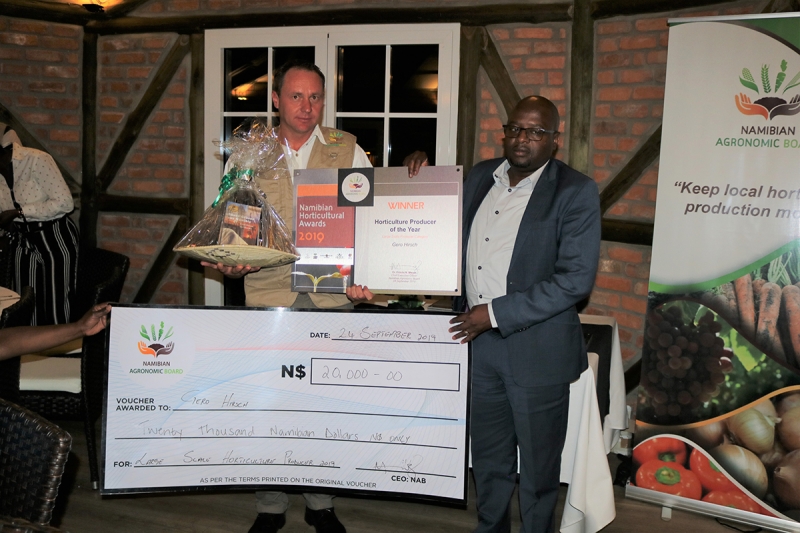 The Namibian Agronomic Board (NAB) hosted the annual National Horticulture awards on Tuesday, 24 September 2019 at Roof of Africa in Windhoek.

Each year, the Namibian Agronomic Board (NAB) hosts this event in honour of the outstanding horticulture industry producers and traders. The event aims to publicly recognise the hard work, innovation and ingenuity of horticulture producers and traders in their efforts to provide the Namibian market with locally produced fresh fruit and vegetables.

This year’s awards were held in Windhoek different from the previous year’s when awards were normally hosted in conjunction with the National Horticulture Day (NHD), which is usually a full day event held in the region of either, the winner of the small, medium or large-scale category. The decision was enacted by the board in order to cut costs amidst the drought that is currently being experienced in the country, and host a smaller awards ceremony in the capital instead.

Speaking at the occasion, the NAB’s, National Horticulture Task Team (NHTT) Chairperson, Mr Nico van der Merwe, highlighted on the positive developments, such as the increase of the horticulture “Market Share Promotion” scheme from 5% in 2005 to current 47% threshold in the 2018/19 financial year. The MSP requires that all traders, retailers and caterers buy a minimum of 47% of all their fresh fruit and vegetables locally, in a given period, before they can be issued with import permits.

Also speaking at the event, the NAB Chairperson, Mr Michael Iyambo in his address shared the same sentiment. “The NAB, have put mechanisms in place to closely monitors the compliance of all importers of horticulture produce, and to ensure that the agreed minimum of 47% local procurement is extensively adhered to”, he added.

He further emphasised that the NAB will remain committed to the overall development of the horticultural industry through market regulation and facilitation. In addition to that the NAB is conducting various research projects aimed at the sustainable development of the horticultural industry which will be published later this year.

The overall winners in the producer categories awarded are:

The overall winner in the horticulture trader “Mega Category” is:

The sponsors for this year’s National horticulture awards include, Agribank of Namibia, Agra, Stark Ayres, Kaap-Agri Namibia & Agri-Gro Namibia. The NAB Chief Executive Officer, Dr Fidelis Mwazi commended all the sponsors for contributing towards making the event a success. He further emaphsised on the importance of platforms such as the National horticulture awards in recognising and encouraging producers & traders in Namibia to continue in their efforts in providing the nation with fresh fruit & vegetables, despite the unfavourable weather conditions. “With consistency, focus and hard work, we can as an industry contribute towards food security for our country and this can only be achieved through organised agriculture where all role players are involved in assisting the producers to obtain the desired yield in tons per hectare”, he said.

Furthermore, “we are currently implementing the goals & objectives outlined in the 2019/20 – 2023/24 NAB strategic plan, which is our dynamic blueprint towards agronomy & horticulture industry development. We are also confident that it will steer the NAB towards our vision of being a world class regulator of a vibrant , diversified and sustainable crop industry’, he concluded.