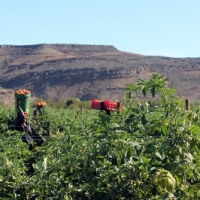 Windhoek, 9 May 2016: There are few occasions when farmers gather to truly celebrate their achievements. One such occasion is the National Horticulture Day (NHD), organised annually by the Namibian Agronomic Board. During the National Horticulture Day, the Horticultural Producer of the Year Awards Ceremony is held. This is a time when local producers of horticultural fresh fruit and vegetables from across the country converge on the farm of the winning producer of the year in the emerging, medium scale or large scale category. Now in its 10th year, the Horticulture Producer of the Year Award recognises the extraordinary breed of farmers who have made a success of their farming business through sheer determination, dedication and foresight.

The award has also become known for celebrating the professional, innovative and sustainable approach of our farmers and farming families and highlights their successes and the important role they play in producing food for Namibia. Despite massive odds, particularly given the current drought, Namibian producers have steadily increased their supply of fruit and vegetables to traders. The value of formally marketed local produce increased from N$ 195 435 229 to N$ 235 832 782 between February 2015 and February 2016.

This drive to decrease our dependence on imports – or import substitution as it is known in the industry – is a practical demonstration of the NAB’s motto which is “to create an environment that is conducive to the growing and processing of crops”. This market regulation is what is known as the Namibian Market Share Promotion, or MSP, where all importers of fresh fruit and vegetables in Namibia are required to buy a minimum percentage of their fresh produce from Namibian producers – before they are granted a permit to import fresh produce from outside the country. Currently this minimum percentage stands at 44%, up from a mere 5% since the inception of MSP in 2005. As a result of this voluntary agreement between producers and traders, the local horticultural industry in Namibia continues to grow. The NAB plays a crucial role in facilitating and overseeing the implementation of this agreement. The implementation is done by the Agro Marketing and Trade Agency (AMTA), an agent appointed by the NAB. Under this agency agreement, the responsibilities of AMTA include issuing import permits and border control.

Click on the link below for the Horticulture Producer of the Year Application Form or alternatively you can contact the NAB on (061) 37 95000 for further information.