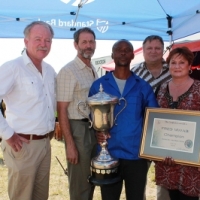 The Zambezi Dryland Maize Champion has been awarded. Fred Mwabi was awarded with his trophy, certificate and farming equipment or a visit to an agricultural show to the value of N$ 16 000.00. The prizes and certificates were awarded to him during the official opening of the recently held Zambezi Bream Festival and Cultural Festival in Katima Mulilo. In April of this year, an evaluation of the three nominated producers’ farms were conducted by an impartial team of evaluators, comprising a team of 4, each representing:

Criteria during assessments includes, amongst the extent to which producers manage their farms to maximise their yield. Such practices typically include introducing fertilisers to their farming practises and where possible how modern farming practices are incorporated into their production processes, how financial management systems are used in the farming practice to assist the producer in achieving maximum yield and how they’ve introduced crop diversification. All these improvements have the potential to aid the farmer in producing a surplus crop that can be sold and entered into the food supply chain, contributing to food security in Namibia.

“I would like to congratulate the small scale producers of the Zambezi Region for this year’s record harvest of between 6 000 and 7 000 tons of white maize that will be marketed,” Christof Brock, CEO of the Namibian Agronomic Board told the gathering at the Zambezi Bream Festival and Cultural Expo. He went on to say, “I would like to acknowledge the region for having small scale farmers that produce such good harvests.”

Mr Hannes Grobbelaar of the Agronomic Producer’s Association (APA) said of the winner’s production process and practices, “Mr Mwabi has a very good understanding of how to nurture his crop, including the use of fertilisers and pesticides and how to maximise the capture of rain in his field so that the soil retains as much water as possible.” Mr Grobbelaar, a commercial white maize producer and mentor to many small scale producers in the Zambezi Region, is a member of the APA, previous Member of the Namibian Agronomic Board and one of the evaluators of this competition. He commended Mr Mwabi’s plant population and the quality of the maize that comes from his fields, “what he has achieved is very impressive,” says Grobbelaar.

Also in attendance at the Zambezi Dryland Maize Champion award handover was the large scale commercial Master Agronomist for 2014, Mr Andre Compion.
During the same ceremony, the Mahangu Regional Winners were also announced. The Zambezi Regional Champion Mahangu Farmer title is awarded to a producer who cultivates 5 to 10 hectares of mahangu and was this year awarded to Mrs Catherine Sikanda. The Caprivi Regional Grand Champion Mahangu Farmer cultivates more than 10 hectares of mahangu is once again awarded to Mr Christopher Kasuka.