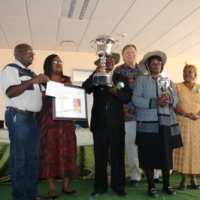 As it has been customary since 2002, the Namibian Agronomic Board (NAB) has again hosted, in partnership with the Ministry of Agriculture, Water and Forestry (MAWF), the event to reward and honour the best mahangu farmers of the country for the year in two categories.

Honourable Sirkka Ausiku indicated that the aim for the mahangu champion competition complement to other initiatives that are aimed at encouraging farmers to work hard in order to contribute to household and national food security, for example the Operation Werengendje in Kavango East Region, Operation Tulongeni in Omusati Region and Operation Katemo in Kavango West Region, which are all in line with Dryland Crop Production Programme of MAWF.

The new Chairperson for NAB, Mr. Michael Iyambo, in his address emphasised that there are three risks for dryland/rain-fed mahangu producers, namely market, price and climate.

Firstly, the NAB guarantees the market because there will be no imports until the locally produced mahangu has been used up.
Mr. Fred Mwabi, National Mahangu Champion for 2017

Secondly, there is a pre-planting floor price in place which is production cost related. While some people believe that marketing mahangu is a problem for mahangu farmers, this is not the case because Agro-Marketing and Trade Agency (AMTA) is going down to a much decentralized level of purchasing at various Agricultural Development Centres and other buying points in the mahangu producing regions, and pay the producers on the spot. However, the increased production is still a challenge for the nation to avoid having to import substantial amount of mahangu every year to satisfy the formal market.

Thirdly, climate is not yet well addressed. There is a proposal for risk sharing between the Government and the rain-fed crop producers. In this proposal, farmers are encouraged not to plant for surplus in years when the Government has predicted El Nino. In contrast, surplus producers would receive seeds and fertilizers vouchers in the Government predicted good years that are repayable at point of sale after an adequate to good harvest, or repaid from the National Disaster Fund if it turns out to be a crop disaster drought year, in spite of the positive prediction.

In the speech of the Deputy Minister for Agriculture, Water and Forestry (MAWF), Honourable Anna Shiweda, that was read on her behalf by Mrs. Sophia Kasheeta, the Deputy Permanent Secretary for the Department of Agricultural Development, the Deputy Minister said the Government’s priority is to support agriculture and food security through rain-fed agriculture in order to increase food production in the country. This is because a nation that depends on others for food cannot achieve “National Sovereignty”. On that note, the Government under the Dryland Crop Production Programme (DCPP) avails farming inputs such as improved seeds and fertilizers, ploughing and weeding services, technology for land preparation and post-harvest management to improve production output and quality of crops.