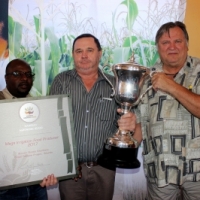 For the first time in history agricultural farming on more than 100 ha irrigated land has been recognised by the Namibian Agronomic Board (NAB) for excellent and efficient food production. The winner, Rustie Kleynhans, manages the Sikondo Green Scheme Project, west of Rundu, where about 600 ha grains and horticulture products are planted under irrigation. Of these about 380 ha is planted on a commercial basis and 180 ha is panted by small and medium scale farmers. Rustie has been in charge of Sikondo for the past five and a half years after Agribusdev has sourced him from South Africa where he worked for a company that produced fresh produce for Pick n Pay.

The award was presented during the World Food Day celebrations held in Stampriet on 19 October. At the event the Permanent Secretary of the Ministry of Agriculture, Water and Forestry, Mr Percy Misika, stated that only 14 years remain for the country’s leaders to ensure that Vision 2030 is realised. According to him it seems like the goals of a country free from hunger, poverty and malnutrition is nowhere near being realised. “What needs to be done to ensure we are food secure?” asked Misika before presenting the Minister, Mr John Mutorwa’s, speech.

According to Mutorwa urban migration, which increases the demand for food, is taking place on a major scale with approximately 67% of the population expected to live in cities by 2041. To achieve food security, the government has implemented irrigation projects like Sikondo, Ndonga Linlena, Uvungu-Vungu, Shadikongoro etc as well as projects at the Orange River. By locating these green schemes in the rural areas the living standards of people could be enhanced migration to urban areas minimized. The plan is to expand the current 11 500 ha under irrigation country-wide to 27 000 ha by 2030. This includes the planned 5 000 ha at the Neckartal dam and support to small-scale farmers through the Harambee comprehensively coordinated and integrated agricultural development programme (HACCIADEP). Mutorwa stated that government cannot accomplish this goal alone and needs the help of public and private sectors and communities at large.

Picture: Agriforum
Rustie Kleynhans, manager of the Sikondo Green Scheme, receives his plaque from Michael Iyambo, Chairman of the NAB (left) and his trophy from Christof Brock (right), Chief Executive Officer of the NAB.