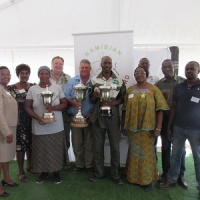 The Namibian Agronomic Board (NAB) hosted the 11th annual Namibian Horticulture Day on Friday, 23 September 2016, to recognise the best horticultural producers and traders in 2016. The event awards and spreads awareness of excellent farming practices among small, medium and large scale producers, as well as traders.

The event was attended by 245 producers, traders, and was hosted on the farm of the winner of the large scale farmer category, Farm Oshivelo in the Oshikoto Region.

The winning producers were Ms Laurentia Nakandanga of the Kavango East Region in the small-scale category, Mr Andreas Ashimbanga of the Omusati Region in the medium-scale category, and Mr Jan Cronje of the Oshikoto Region in the large-scale category. In addition to trophies and certificates, they received gift vouchers from NAB, AMTA and input suppliers. Geka Trading Enterprises and Sikondo Green Scheme Irrigation Project received an award for selling the highest volume of fresh produce to the AMTA Hub.

Winning traders were identified on the basis of achieving of the highest percentage of local produce compared to imports in their size categories. In terms of NAB’s Market Share Promotion, which is implemented by AMTA, traders in horticulture fresh produce are required to buy a certain percentage locally (currently set at 44%), before they can qualify for import permits for horticulture products. Traders are a vital link in developing the horticultural subsector, as they are a key element in bringing local farmers’ fresh produce to the consumers.
The winning traders were Stampriet Farmer’s Market in the Mega Trader Category, Okuryangava Fresh Produce in the Very Large Trader Category, Brenner’s Fruit in the Large Trader Category, Trust Market in the Medium Trader Category, and Zaheer Traders in the Small Trader Category. The AMTA Hub Wholesale Agent of the Year was won by Stampriet Farmer’s Market and Iihape Marketing & Promotions was recognised as the AMTA Hub Commission Marketing Agent of the Year.

The award ceremony was opened by Honourable Betty Kaula, Regional Councillor for the Guinas Constituency, and the keynote address was delivered by Deputy Minister of Agriculture, Water and Rural Development, Hon Anna Shiweda on behalf of Honourable Minister John Mutorwa. Honourable Shiweda also handed the awards to the winners. Mr Michael Iyambo, Chairperson of the National Horticulture Task Team officiated as Master of Ceremonies.
In her address, Honourable Shiweda highlighted the fact that Namibian horticultural production and trading has grown to supply 44% of Namibia’s market demand for fresh produce in the formal horticulture market, up from just 5% in 2002. She attributed this to the excellence of producers and traders, under the auspices of NAB.

She expressed gratitude to NAB for continuing to bring the industry together, and for showing leadership in recognising the contributions that producers make toward producing food for Namibia

Honourable Shiweda went on to encourage initiatives from agronomic unions and associations that will keep horticultural production at an optimum level.

Echoing Honourable Shiweda, NAB Chairperson Ms Sirkka Iileka, emphasised the importance of producer and trader associations, saying that the voices of these associations play a vital role in developing national policy for horticulture and agriculture.

The event also doubled as a learning opportunity to improve horticultural practices. The 2016 theme was ‘Better Fresh Produce for Better Business’, with an emphasis on standards, quality, packaging and sales. Presentations by guest speakers consisted of an overview of horticultural marketing by Jaco Oosthuizen of the RSA Group, consideration of packaging by Frank Scholtz of Mpact, food safety by Fidelis Mwazi of AMTA and seed selection by Lizindi van der Kolff and Frikkie Bam of Starke Ayres.