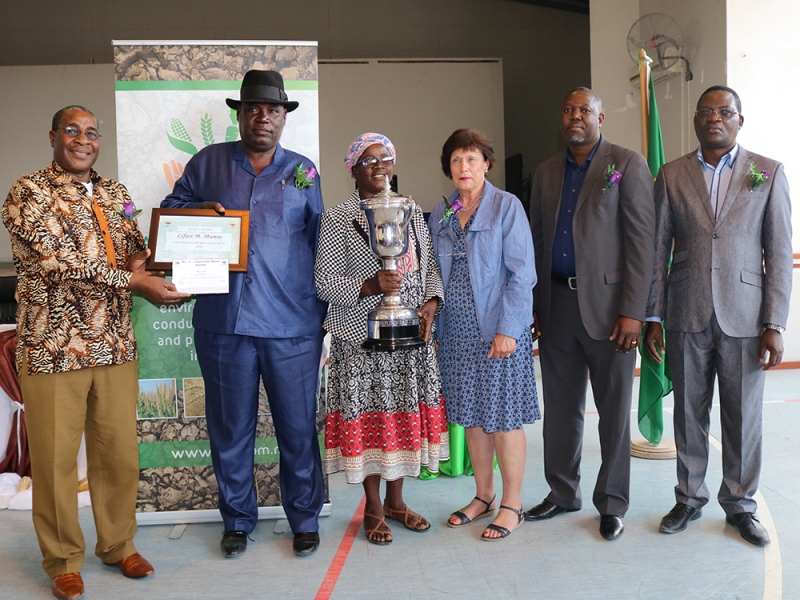 Mr. Lifasi Munsu from Sibbinda constituency in the Zambezi region was crowned as the National Communal Dry-Land Maize Champion Farmer Of The Year, at an awards ceremony held on Wednesday, 22 August 2018 at the UNAM Multi-Purpose Centre in Katima Mulilo.

Since the establishment of the awards competition in 2008, the Namibian Agronomic Board (NAB) annually hosts this special event. The awards aim at encouraging producers to implement good farming practices in order to increase maize grain yield to ensure adequate produce for household consumption and surplus for the formal market. Mr. Lukatezi Kulobone from the Linyati constituency, also in the Zambezi region was awarded as the National Communal Dry-Land Maize Runner-Up.

Speaking at the event, Hon. Alfea Sampofu, Governor of the Zambezi region congratulated the winners for the hard work that led to their recognition. The Honourable, further encouraged crop farmers in the Zambezi region to consult Agricultural Extension Offices in their respective constituency to get assistance and obtain expert advice on the types of seed and fertilizers that are suitable for their farming land.

“We need to stop relying on neighbouring countries to feed us, the Zambezi region has fertile soil and abundance of water that could potentially serve as one of the bread baskets of Namibia in providing food security for the country”, he said.

The competition is scored using several operational elements including tonnage produced, production methods used and, inputs application. Crop and labour management, marketing, financial management and record keeping are also taken into consideration. All dry-land maize producers from the five communal maize producing regions, namely: Zambezi, Kavango East, Kavango West, Otjozondjupa and the Omaheke can participate in the competition through their agricultural extension offices. The Zambezi region is projected to harvest 6 000 tons of marketable maize grains from the 2017/2018 cropping season.

Speaking at the same event, Dr. Marina Muller, NAB Vice-Chairperson, said although Namibia currently imports most of its white maize grains through formal markets to feed the nation. She assured the nation that progress has been made with various initiatives by the NAB and the Ministry of Agriculture, Water and Forestry to improve the situation, in terms of production and market regulation.

“During the 2013/2014 Financial Year, Namibia imported 170 234 MT of white maize grains versus 36 694 MT produced locally, at that time it looked impossible that at some stage we may even reach 50% ‘local production of what we consume’’, she said.

“However, 4 seasons later in 2017, Namibia managed to produce 76 660 MT of white maize grains and imported only 50 483 MT, this shows that the potential is high for us as a nation to maximise production and reverse the situation so that we become self-sufficient in maize grains’’, she added.

Reflecting on the event, Dr Fidelis Mwazi, CEO of the NAB, highlighted the importance of smart agricultural methods and encouraged farmers and potential farmers, farmers unions in the Zambezi region to take advantage of the climatic and soil conditions to maximize production in maize production. He further advised farmers to guard the market graspingly from forces that might affect Namibian grains access to the formal market.

“Let us not allow illegal maize grains to enter the region in a perceived way that it is locally produced because it leads to the region’s loss of credibility and capacity to market the produce”, he concluded.