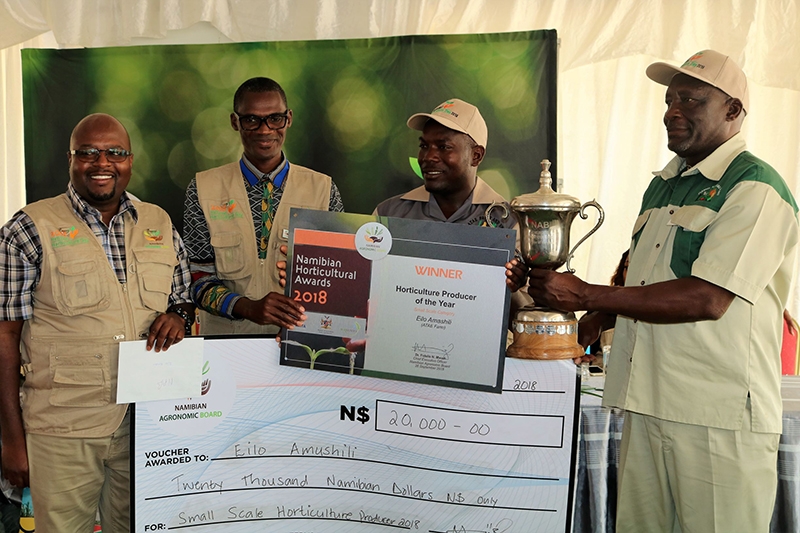 The Namibian Agronomic Board (NAB) hosted the annual National Horticulture Day (NHD) on Wednesday, 26 September 2018 at Olushandja in Omusati region.

Each year, the Namibian Agronomic Board (NAB) honours outstanding horticulture industry producers and traders at this prestigious event. The event aims to publicly recognise the hard work, innovation and ingenuity of horticulture producers and traders in their efforts to provide the Namibian market with locally produced fresh fruit and vegetables.

This year’s NHD was held under the theme “Small-Scale Producers, Our Food- Our Story”. The Winner in the small-scale category is from Olushandja (Epalela) area which undoubtedly befits the theme, and hence the decision by the NAB to host the event in the region. The NHD day which was attended by more than 200 horticultural producers and stakeholders from all over the country consisted of three main sessions.

The first session consisted of a presentation on the analysis of current marketing trends and alternative marketing options for small scale producers across Namibia followed by a panel discussion on the repositioning small-scale producers for increased access to formal markets. The panel shared their views with the audience at the event on best practices regarding market access which mainly depends on consistence of supply, good relationships and quality produce. However, the panel recommended that the NAB should engage with stakeholders in the horticulture Industry to implement recommendations thereof.

The second session of the NHD consisted of the official awards ceremony. Speaking at the NHD event, Hon. Erginus Endjala, Governor of the Omusati region said, the region is an active producer in securing horticulture food production and has attracted different investors to venture into value addition so that produce not consumed by the fresh produce market could be processed without being wasted. “Horticulture producers have been on the rise and olushandja alone consists of more than 80 horticultural producers, which is quite an achievement”, he added.

The Hon. Governor, further called upon the Ministry of Agriculture, Water and Forestry, the NAB as well as other relevant stakeholders to collaborate in creating equal opportunities in the formal market to allow small scale producers to market their fresh produce.

The event was honoured by a guest speaker Ms. Maria Zileni Zaloumis-Nyirenda, a Zambian large-scale horticulture farmer popularly known as the “Zed Farmer”. Her farm Tuzini Farms LTD, currently employs a total number of 62 people of which 40 are women and the rest are men. Under her leadership, Tuzini Farm produces a total of 300 boxes of tomatoes per day and is also the major supplier of tomatoes to Freshmark (SHOPRITE) country-wide in Zambia and as well as for export markets.

Reflecting on her journey in the farming industry, Maria said being a woman can be a huge challenge in the Agriculture sector, because traditionally most farmers were men. She advised Namibian Women farmers to persevere despite the challenges they encounter in the Agriculture industry. “With consistency, focus and hard work everything is possible in farming. You also need to be patient and strong, because not every day is a good day, but the key to it all is that being a woman should not be a limitation to anything”, she said.

Speaking at the occasion, the NAB’s, National Horticulture Task Team (NHTT) Chairperson, Mr Nico van der Merwe, said the industry has experienced notable positive developments, such as the increase in horticulture production recorded in the 2017/2018 financial year as well as the increase of 74.5% in monetary value experienced over the past 5 years in the Namibian Horticultural Industry. “The Namibian Agronomic Board has been implementing the horticulture “Market Share Promotion” scheme since its inception in 2005. Back then, the MSP stood at just 5% and has grown to its present 44 % as a threshold. The MSP requires that all traders, retailers and caterers buy a minimum of 44% of all their fresh fruit and vegetables locally, in a given period, before they will be issued with import permits”, he said. “In addition to that, the NAB is also currently conducting research on onion production self-sufficiency that will guide the establishment of policy interventions to reduce onion importation since currently imports versus local is at approximately 50%”, he concluded.

The same sentiment was also echoed by the NAB Chairman, Mr Michael Iyambo in his address during the awards ceremony. “The NAB, through its agent AMTA, closely monitors the compliance of all importers of horticulture produce, and curtails the imports issued to traders, retailers and caterers who do not adhere to the agreed minimum of 44% local procurement”, he added.

The overall winners in the producer categories awarded are:

The overall winner in the horticulture trader “Mega Category” is:

The sponsors for this year’s NHD include, Agribank of Namibia, Namibia Fresh Produce Market, Agra Ltd, Stark Ayres, NAHOP, NATFP, Olushandja Horticultural Producer Association, Kaap-Agri Namibia, Agri-Gro Namibia, Etaka Agri-Vet and Compact Packaging. The NAB Chief Executive Officer, Dr Fidelis Mwazi applauded all the sponsors for contributing towards making the event a success. “We as a nation appreciate your gesture and your value added to the industry, it signifies the importance of working together, on a common goal of creating a conducive environment in facilitating production, processing, storage and marketing of horticulture products through market regulations despite economic challenges we are facing as a Nation”, He concluded.