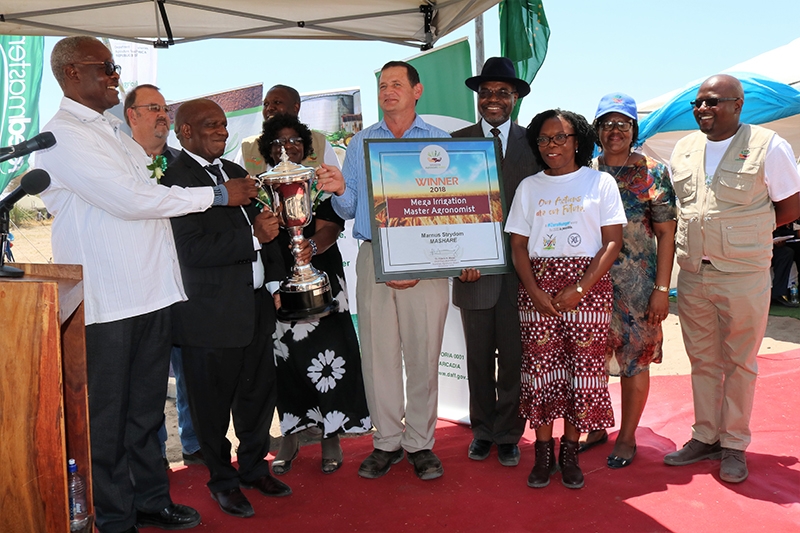 Marnus Strydom, Manager of the Mashare Irrigation Project in the Kavango-East region was crowned 2018 Mega-Irrigation farmer of the year. This award was presented during the World Food Day event held on 30th October 2018 at Bunya combined school in the Kavango.

The Namibian Agronomic Board bestows this prestigious award to a mega irrigation master agronomist, who has in a very short period of time demonstrated exceptional farming practices and is expecting good harvest yield. The winner is also recognised by the NAB for excellent and efficient food production and their contribution to food security in the country.

Marnus, who was a lecturer at the University of Free-State, in South Africa has always been passionate about agriculture and soil science. For the year under review, the Mashare Agricultural project is producing 325 ha of wheat, and expects approximately 2775 tons. This could add up to 40 % of wheat grain expected to be harvested in the country at average of 6 to 8 tons per hectare. He produces white maize and wheat under.

The NAB’s Chief Executive Officer, Dr Fidelis Mwazi, commended, Marnus and his team for their hard work and vision to improve food security in Namibia.

“Despite the challenges of climate variability experienced during the 2017/2018 growing and marketing season, Namibia still managed to produce approximately 58 000 Tons of white maize grains, 4000 tons Pearl millet grains, in terms of wheat, about 6,900 tons is expected to be harvested and formally marketed in Namibia,” He concluded.

The Namibian Agronomic Board was also one of the proud sponsors towards this year’s World Food Day event.
Speaking at the event, the Minister of Agriculture, Water and Forestry Minister, Hon. Alpheus! Naruseb, encouraged all relevant stakeholders to come together in the fight against world hunger. “Reaching the zero-hunger target in Namibia is possible”, he said.

Barbara holds a Bcom degree in Management Accounting. Her strategic approach is the development of structures, systems and compliances.

Dr Fidelis Nyambe Mwazi officially took over the reins of the NAB from the 1st of August 2018. He is a professional scientist in crop science and sustainable agriculture with 18 years working experience in plant propagation, academic and research environment, agronomic and horticulture, project management and community services.

Dr Mwazi holds a PhD Degree in Agriculture (Crop Science) from the University of Namibia, his research topic was on: Optimizing non-flooded landscape units to support maize production, Zambezi Region. The overall objective was to use maize as a case study crop to assess possible ways that might optimize the non-flooded landscape units to support arable production in the Zambezi Region.

Prior to his appointment as NAB’s Chief Executive Officer, Dr Mwazi worked as a Senior Manager for Standards and Trade at Agro-Marketing and Trade Agency (AMTA) from February 2015 to June 2018. He was mandated to implement statutory rules and regulations of the Agronomic Industry Act, Act 20 of 1992 by producers and traders involved in production and trading of the agronomic and horticultural products country-wide. The implementation of these rules and regulations in terms of compliance by the industry, as enshrined in the Act, was delegated to AMTA by the Namibian Agronomic Board (NAB) in August 2014 after the appointment of AMTA as an Agent of the Board (NAB). Thus, he implemented various compliance programmes for agronomy and horticulture market share promotion, food safety and crop specific marketing standards, inspections of farms and facilities for compliances to Good Agriculture Practices (GAP) and Hazardous Analytical Critical Control Point (HACCP), border control and inland inspectorate as well as quality management aspects.

He also worked as a National Horticulture Manager at the Namibian Agronomic Board from May 2013 to January 2015 responsible to implement the Horticulture Market Share Promotion for controlled crops. In addition, he also worked as a: UNDP/MET Technical Advisor, for Africa Adaptation Project in Namibia from September 2010 – December 2012. The project focused on Building a foundation for a national approach to climate change adaptation (CCA) in Namibia” aimed to strategically enhance the capacity of Namibians to respond to and be prepared for climate change. He also led the process for the development of the National Policy on CC and its implementation strategy and Action Plan and also the supervision for the implementation of various CC technical studies and peer reviewed the reports.

Other Job appointments he occupied include, Researcher, Coastal Agriculture & Plant Biodiversity at SANUMARC, Henties Bay, University of Namibia (UNAM) as well as Tutor/Lab Technician and Lecturer for courses such as HCT, AAG, BPP, & SSA at Namibia University of Science and Technology (NUST) and Nursery Superintendent at Development Brigade Cooperation (DBC).

His diverse training, academic experience in the horticulture and agronomy industry, scientific and research knowledge, leadership and analytical skills, practical working knowledge of agricultural production and trading systems in Namibia are indeed essential assets in running the NAB.

Before joining the NAB, he worked for the Ministry of Agriculture, Water and Forestry as an Agricultural Scientific Officer at the Directorate of Extension and Engineering Services (DEES) in the North Central Division (the Division which covers the areas of Oshikoto, Oshana, Ohangwena and Omusati Regions) from June 2002 to March 2014. He was, therefore, mainly responsible for providing agricultural extension services (to farmers and fellow staff members) in the form of advisory, information communication and training services aimed at empowering farmers to adopt improved agricultural technologies and practices.

Lesley Laurens Losper has joined the Namibian Agronomic Board (NAB) to fill the position of a Temporary Horticulture Specialist with effect from 26 June 2017. Lesley has an extensive academic knowledge and industry experience of having worked in the agriculture, education and environment sectors in Namibia.