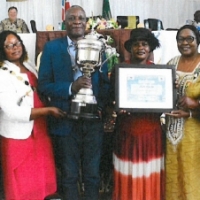 On 13 September, the communal white maize and mahangu farmers from the Zambezi Region who apply the best dry-land production methods, were awarded by the Namibian Agronomic Board (NAB). Mr Alec Siseho was selected as the dry-land white maize champion farmer for 2017 and Mr Fred Mwabi as the mahangu champion of this year. The runner-ups were Charles Mutelo (white maize) and Eris Likando (mahangu).

The NAB annually awards communal grain producers for their personal contribution towards development within the grain production sector in the agronomic industry. A special event is annually organised to award the dry-land grain farmers who have achieved impressive levels of white maize and mahangu production by using modern farming practices and innovations. The competition is scored using several operational elements including tonnage produced, production methods used and, inputs application. Crop and labour management, marketing, financial management and record keeping are also taken into consideration. The awards have been ongoing since 2008 except for 2015 and 2016. Due to low production caused by the droughts, no competition was held during that time. From 2018 the maize competition will be widened to also include communal farmers from the Kavango West, Kavango East, Otjozondjupa and Omaheke Regions.

The maize champion, Mr Alex Siseho, farms outside the Linyate village and started planting early December. He was able to market 16 tonnes while ensuring enough surplus for household food security. Ploughing was done with assistance of a government tractor while planting, fertilising and harvesting was done with hired labour. Mr Siseho started with agronomic production in 1991. He first planted cotton but converted to maize the following year on 4 hectare. Currently, he plants on 10 hectares under white maize. This expansion was possible only after systematic debushing which he describes as one of the major challenges. Currently Alex employs six permanent workers, three for agronomy and three for livestock farming.

During the awards ceremony, the Deputy-Minister of Agriculture, Honourable Anna Shiweda, lauded the small-scale farmers in the Zambezi Region for this year’s bumper crop of approximately 8000 tonnes. Ms Shiweda said that it is a clear indication that Government’s support to small-scale producers is yielding the intended results. The previous highest market crop was 6000 tonnes. The total marketable harvest is heavily influenced by how much farmers decide to keep for personal consumption which can be up to half of their total harvests.

Ms Shiweda added that Government’s support to small-scale farmers will be intensified, especially due to the past seasons exceptional outcome. She specially referenced to the Harambee comprehensively coordinated and integrated agricultural development programme (Hacciadep) which has already been approved by Cabinet. The programme consists of ten schemes which aim to stimulate economic activity in the agricultural sector. When the programme kick-off the agricultural mechanization and seed system development schemes will receive the highest priority. This will assist especially rural grain producers to have access to agricultural machinery to prepare the soil and quality locally produced seeds.

Because the Zambezi Region’s population can only consume about 3000 tonnes of the total 8000 tonnes of white maize, the surplus would in the past have been exported to central parts of Namibia. Through the grain procurement programme, which is implemented by the Agra-Marketing and Trade Agency (AMTA), farmers can now market their grain to the National Strategic Food Reserves (NSFR) silos in their own region preventing a substantial deduction from the grain price due to the added transport to mill-door cost. Due to the good rains and the exceptional harvests resulted from that, storage capacity were filled to the brim. In this regard the deputy-minister extended Government’s appreciation to the NAB who availed N%26 million from their own reserves, to AMTA to assist with the buying of this surplus grain.

Regarding the illegal importation of maize from Zambia to Namibia due to the higher local floor price, Me Shiweda confirmed that these activities are still taking place adding that some culprits have already been apprehended. “I plead with the authorities to redouble your efforts to combat the illegal activities so that the advantage of a guaranteed market with a guaranteed attractive pre-planted floor price will not be abolished due to abuse.”

The recent appointed chairperson of the Namibia Agronomic Board, Mr Michael Iyambo, said that it is impossible to create an environment conducive to local production if the efforts by the NAB and its agencies to eradicate illegal imports from Zambia, is not embraced. He said a high level cooperation is needed between community leaders and the communities themselves along with authorities such as AMTA, the police and border customs to eradicate this problem. “If this ‘gogga’ is not effectively rooted out it will deeply affect Government resources since this maize ends up being traded by private millers and the office of the prime minister through Government silos. This depletes funds earmarked for locally produces maize,” said Michael.

Lastly, Mr Iyambo added that the Zambezi Region has immense potential and therefore farmers must spend more time to understand and appreciate the environment in order to tap its unmeasured potential. In this regard, he invited those farmers who wants to learn, to visit his farm where he is willing to share his knowledge.

Barbara holds a Bcom degree in Management Accounting. Her strategic approach is the development of structures, systems and compliances.

Dr Fidelis Nyambe Mwazi officially took over the reins of the NAB from the 1st of August 2018. He is a professional scientist in crop science and sustainable agriculture with 18 years working experience in plant propagation, academic and research environment, agronomic and horticulture, project management and community services.

Dr Mwazi holds a PhD Degree in Agriculture (Crop Science) from the University of Namibia, his research topic was on: Optimizing non-flooded landscape units to support maize production, Zambezi Region. The overall objective was to use maize as a case study crop to assess possible ways that might optimize the non-flooded landscape units to support arable production in the Zambezi Region.

Prior to his appointment as NAB’s Chief Executive Officer, Dr Mwazi worked as a Senior Manager for Standards and Trade at Agro-Marketing and Trade Agency (AMTA) from February 2015 to June 2018. He was mandated to implement statutory rules and regulations of the Agronomic Industry Act, Act 20 of 1992 by producers and traders involved in production and trading of the agronomic and horticultural products country-wide. The implementation of these rules and regulations in terms of compliance by the industry, as enshrined in the Act, was delegated to AMTA by the Namibian Agronomic Board (NAB) in August 2014 after the appointment of AMTA as an Agent of the Board (NAB). Thus, he implemented various compliance programmes for agronomy and horticulture market share promotion, food safety and crop specific marketing standards, inspections of farms and facilities for compliances to Good Agriculture Practices (GAP) and Hazardous Analytical Critical Control Point (HACCP), border control and inland inspectorate as well as quality management aspects.

He also worked as a National Horticulture Manager at the Namibian Agronomic Board from May 2013 to January 2015 responsible to implement the Horticulture Market Share Promotion for controlled crops. In addition, he also worked as a: UNDP/MET Technical Advisor, for Africa Adaptation Project in Namibia from September 2010 – December 2012. The project focused on Building a foundation for a national approach to climate change adaptation (CCA) in Namibia” aimed to strategically enhance the capacity of Namibians to respond to and be prepared for climate change. He also led the process for the development of the National Policy on CC and its implementation strategy and Action Plan and also the supervision for the implementation of various CC technical studies and peer reviewed the reports.

Other Job appointments he occupied include, Researcher, Coastal Agriculture & Plant Biodiversity at SANUMARC, Henties Bay, University of Namibia (UNAM) as well as Tutor/Lab Technician and Lecturer for courses such as HCT, AAG, BPP, & SSA at Namibia University of Science and Technology (NUST) and Nursery Superintendent at Development Brigade Cooperation (DBC).

His diverse training, academic experience in the horticulture and agronomy industry, scientific and research knowledge, leadership and analytical skills, practical working knowledge of agricultural production and trading systems in Namibia are indeed essential assets in running the NAB.

Before joining the NAB, he worked for the Ministry of Agriculture, Water and Forestry as an Agricultural Scientific Officer at the Directorate of Extension and Engineering Services (DEES) in the North Central Division (the Division which covers the areas of Oshikoto, Oshana, Ohangwena and Omusati Regions) from June 2002 to March 2014. He was, therefore, mainly responsible for providing agricultural extension services (to farmers and fellow staff members) in the form of advisory, information communication and training services aimed at empowering farmers to adopt improved agricultural technologies and practices.

Lesley Laurens Losper has joined the Namibian Agronomic Board (NAB) to fill the position of a Temporary Horticulture Specialist with effect from 26 June 2017. Lesley has an extensive academic knowledge and industry experience of having worked in the agriculture, education and environment sectors in Namibia.