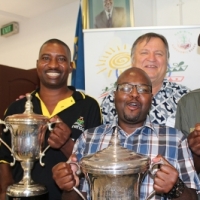 Iyambo made reference to the recently implemented Special Potato and Onion Scheme, an agreement between the Potato and Onion Producer’s Association (POPA) and the Namibia Association of Traders in Fresh Produce (NATFP). The agreement is implemented and administered by the NAB and makes provision for the uptake of all locally produced potatoes and onions before permits are issued for these commodities to be imported from outside the country. “The implementation of this Scheme has been so successful that the borders have been closed for the importation of onions until mid-November 2014,” Iyambo told the audience. “This is a powerful example of what is possible for growth at home and for producing our own to feed our people,” he said. The NAB will monitor the progress of the Special Potato and Onion Scheme closely which may lead to identifying and including other horticulture commodities in the future.

Ms Sophia Shaningwa, Governor of the Omusati Region addressed the gathering and encouraged producers and traders to grow and sustain their industry so that Namibia can become a food secure nation. Recognising that the industry is long term, she said, “make sure that the knowledge and skill you have are given to the next generation so that we can keep feeding the nation.” Emphasising the importance of food security, the Permanent Secretary said on behalf of the Hon John Mutorwa, Minister of Agriculture, Water and Forestry, “The horticulture industry in the Republic of Namibia is a proud example of what can be achieved with strong vision and the discipline in executing well laid plans. Such dedication and determination is what is required to make us a food secure nation and I applaud the efforts and collaboration of producers and traders in making this a reality.”

For the first time, a Medium Scale Producer Category was included and awarded to producers of fresh fruit and vegetables in addition to the Emerging or Small Scale Producer and Large Scale Producer categories that have been awarded for the past 11 years, while AMTA sponsored a new segment for Traders. Winners in the Producers Segment for 2014 are:

Marketing Agents Awards were given to agents in recognition of how much fresh produce they have taken in or bought from producers in their vicinities so that produce can be taken to markets. Winners are:

Traders, wholesalers and caterers play a vital role in the supply chain of fresh fruit and vegetables to end consumers in Namibia and without these players, local producers would not have the truly symbiotic and mutually beneficial relationship that is required for the horticulture sector to thrive. For their contribution toward achieving an MSP of 41.5 %, the following wholesalers were recognised for supporting local producers:

After the award ceremony, all producers and traders spent the afternoon in the fields of the winning Emerging Scale Producer of the Year Mr Epafras Hilengwa at 2nd Chance Farm where he produces commodities that include tomatoes, sweet potatoes, watermelon, green peppers, butternut, paw-paws and mangoes. “Hilengwa’s emerging production area is a showcase of what can be achieved with determination, hard-work and will and is proof of the potential that the horticulture sector in Namibia holds toward reaching food security,” said Mr Fidelis Mwazi, National Horticulture Manager at the NAB, “these initiatives are what the National Horticulture Day is all about and for that we will always keep local horticulture production moving,” he concluded.